The Ruhr (/ˈrʊər/ ; German: Ruhrgebiet [ˈʁuːɐ̯ɡəˌbiːt] (listen)), also referred to as Ruhr area, Ruhr district, Ruhr region, or Ruhr valley, is a polycentric urban area in North Rhine-Westphalia, Germany. With a population density of 2,800/km and a population of over 5 million (2017), it is the largest urban area in Germany. It consists of several large cities bordered by the rivers Ruhr to the south, Rhine to the west, and Lippe to the north. In the southwest it borders the Bergisches Land. It is considered part of the larger Rhine-Ruhr metropolitan region of more than 10 million people, which is among the largest in Europe.

The Ruhr cities are, from west to east: Duisburg, Oberhausen, Bottrop, Mülheim an der Ruhr, Essen, Gelsenkirchen, Bochum, Herne, Hagen, Dortmund, Lünen, Bergkamen, Hamm and the districts of Wesel, Recklinghausen, Unna and Ennepe-Ruhr-Kreis. The most populous cities are Dortmund (with a population of approximately 588,000), Essen (about 583,000) and Duisburg (about 497,000).

In the Middle Ages, the Hellweg was an important trade route from the region of the lower Rhine to the mountains of the Teutoburg Forest. The most important towns of the region from Duisburg to the imperial city of Dortmund were concentrated along the Hellweg from the Rhineland to Westphalia. Since the 19th century, these cities have grown together into a large complex with a vast industrial landscape, inhabited by some 7.3 million people (including Düsseldorf and Wuppertal, large cities that are nearby but officially not part of the Ruhr area).

The Ruhr area has no administrative center; each city in the area has its own administration, although there exists the supracommunal "Regionalverband Ruhr" institution in Essen. For 2010, the Ruhr region was one of the European Capitals of Culture. 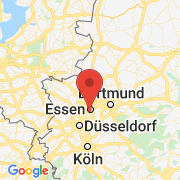