The state was established in 1945 after World War II through the merger of the historic regions of Mecklenburg and the Prussian Western Pomerania by the Soviet military administration in Allied-occupied Germany. It became part of the German Democratic Republic in 1949, but was dissolved in 1952 during administrative reforms and its territory divided into the districts of Rostock, Schwerin, and Neubrandenburg. A state called in German Mecklenburg-Vorpommern was re-established in 1990 following German reunification, and became one of the new states of the Federal Republic of Germany.

On the state's coastline on the Baltic Sea are many holiday resorts and much unspoilt nature, including the islands of Rügen, Usedom, and others, as well as the Mecklenburg Lake District, making the state one of Germany's leading tourist destinations. Three of Germany's fourteen national parks, as well as several hundred nature conservation areas, are in the state. The University of Rostock, founded in 1419, and the University of Greifswald, established in 1456, are among the oldest universities in Europe. In 2007, the 33rd G8 summit took place at the Grand Hotel Heiligendamm on the Mecklenburg Baltic coast during the chancellorship of Angela Merkel, a native of Mecklenburg-Vorpommern. 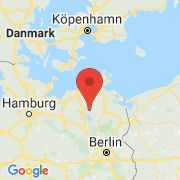