Eschersheim, with a historical record beginning around 1000, is a district in the north of Frankfurt. It sits above the Nidda River and on the opposite bank from Heddernheim. The old part of Eschersheim, "Alt-Eschersheim", is situated between the railroad and the public swimming pool. The patronage was held since 1467 by the Benedictine monastery Seligenstadt. Ecclesiastical Middle Authority was the Archdeacon of the provost of St. Peter in Mainz.

The old water tower in Eschersheim

Around 1900 Eschersheim, previously a rural village without industry, became a wealthy residential area; it was incorporated into Frankfurt in 1910. In the twenties and thirties Walter Gropius built the new settlement "Am Lindenbaum," around the water tower in the southern part of the district. In the fifties, more living complexes were built.

One of Eschersheim's oldest landmarks is an ancient lime tree planted sometime shortly after 1648 to mark the end of the Thirty Years' War. 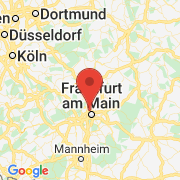