Garmisch-Partenkirchen (German pronunciation: [ˈɡaʁmɪʃ paʁtn̩ˈkɪʁçn̩]; Southern Bavarian: Garmasch-Partakurch) is a ski town in Bavaria, southern Germany. It is the seat of government of the district of Garmisch-Partenkirchen (abbreviated GAP), in the Oberbayern region, which borders Austria. Nearby is Germany's highest mountain, Zugspitze, at 2,962 m (9,718 ft.).

The town is known as the site of the 1936 Winter Olympic Games. 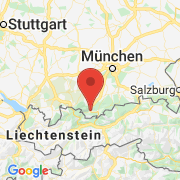