Playa del Inglés (Spanish: [ˈplaʝa ðel iŋˈgles]; English: English Beach) is a sea resort on the south coast of the island of Gran Canaria in the Canary Islands. It is part of the municipality of San Bartolomé de Tirajana, and is a popular tourist attraction. The resident population was 7,515 in 2013.

There is some dispute upon the origin of the resort's name. One explanation is that an English bohemian moved to the untouched area early in the 20th century. However, it has been stated that the Bohemian was actually French, but was mistaken as English by the locals. 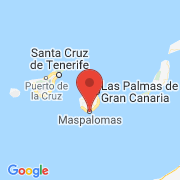