Kyrksæterøra is the administrative center of the municipality of Heim in Trøndelag county, Norway. The village was known as the "white town of the Hemnfjorden" at one time because there were only white houses. It is located at the end of the Hemnfjorden, about 5 kilometres (3.1 mi) southwest of the village of Holla. The villages of Hellandsjøen and Heim both lie to the north and the village of Vinjeøra lies to the south. Hemne Church is located in the village. Norwegian County Road 680 passes through the village. The newspaper Søvesten has been published in Kyrksæterøra since 1994.

At one time, there was a shoe factory, a shipyard, a lumber mill, and fish processing plant in the area. Kyrksæterøra was bombed during World War II, but no lives were lost and there was minimal damage. Nearby, the Nazis also had a large camp for Russian prisoners-of-war. 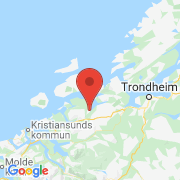