Romsdalsfjord or Romsdal Fjord (Norwegian: Romsdalsfjorden) is the ninth-longest fjord in Norway. It is 88 kilometres (55 mi) long and located in the Romsdal district of Møre og Romsdal county. It flows through the municipalities of Molde, Ålesund, Vestnes, and Rauma. The deepest point in the fjord is just southwest of the town of Molde, where it is 550 metres (1,800 ft) deep. Romsdalsfjord is a threshold-fjord, as it is separated from the ocean by a 180-metre (590 ft) deep shallower areas at the mouth. Several islands and skerries also shelter the wide central fjord from the Atlantic.

The fjord branches off to the minor Tresfjorden and Tomrefjorden to the south, while the main body continues an east-west bound direction. The fjord then forks into three main branches: Moldefjorden (which flows into the Fannefjord) runs past the city of Molde north of the Molde Archipelago; Langfjorden, the longer arm of the fjord, with its branches Karlsøyfjorden, Rødvenfjorden, and the picturesque Eresfjorden, in the middle; and finally the southern arm past the town of Åndalsnes, terminating in Isfjorden.

From Eastern Norway, the fjord can be reached through the Gudbrandsdalen at Lesja, down the Romsdal valley to Åndalsnes. This is also the terminus of the Rauma Line.

Veøya—the holy island—is located at a junction between the three main branches of the fjord. This island was the foremost medieval trading center between Trondheim and Bergen. The Medieval Church of St. Peter (Old Veøy Church), from the late 12th century, is now a museum, but still hosts occasional services.

Wolf Larsen, the main character in Jack London's novel 'The Sea-Wolf' claims that he was born in the vicinity of Romsdalsfjord.

Major inflows of freshwater include the Rauma River and Eira River. Unlike many other fjords, Romsdalsfjord has several islands: Molde Archipelago, Otrøya, Midøya, Sekken and Veøya. Salinity is slightly lower at the surface, just below 3%. Observations around 1930 showed salinity close to 3.5% and stable temperatures just over 7 °C in the deep parts. Heavy, oxygene-rich water from Atlantic typically flow over threshold in April–June and sink to deepest part where old water is displaced. Along the fjord there are examples of hanging valleys, for instance Sjølbotn at Innfjorden. Post-glacial rebound has lifted the land around Romsdalsfjord up to 100 m leaving previous subsea deposits of gravel and clay as wide terraces for instance in the valley mouths around Åndalsnes, Veblungsnes, Innfjorden and Isfjorden. 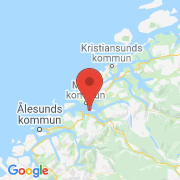