Røldal is a village in the municipality of Ullensvang in Vestland county, Norway. The village lies in the Røldal valley along the Storelva river on the north end of the lake Røldalsvatnet. Røldal is located about 35 kilometres (22 mi) southeast of the town of Odda. Røldal was formerly part of the independent municipality of Røldal from 1838 until 1964 when it became a part of Odda municipality. Then in 2020, it became part of Ullensvang. The 13th-century Røldal Stave Church is located here.

The village is located at the junction of the European route E134 highway and the Norwegian National Road 13. The E134 highway follows a historic route that connects Eastern and Western Norway, passing right through Røldal. It is located near the borders of three counties: Hordaland, Rogaland (to the south), and Telemark (to the east).

People from this area use the demonym røldøl for themselves, others who live outside of Røldal generally use the term røldøling. 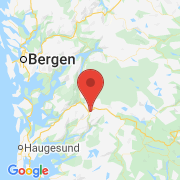