Nord-Pas-de-Calais (French: [nɔʁ.pɑ.də.ka.lɛ] (listen)) is a former administrative region of France. Since 1 January 2016, it has been part of the new region Hauts-de-France. It consisted of the departments of Nord and Pas-de-Calais. Nord-Pas-de-Calais borders the English Channel (west), the North Sea (northwest), Belgium (north and east) and Picardy (south). The majority of the region was once part of the historical (Southern) Netherlands, but gradually became part of France between 1477 and 1678, particularly during the reign of king Louis XIV. The historical French provinces that preceded Nord-Pas-de-Calais are Artois, French Flanders, French Hainaut and (partially) Picardy. These provincial designations are still frequently used by the inhabitants.

With its 330.8 people per km on just over 12,414 km, it is a densely populated region, having some 4.1 million inhabitants, 7% of France's total population, making it the fourth most populous region in the country, 83% of whom live in urban communities. Its administrative centre and largest city is Lille. The second largest city is Calais, which serves as a major continental economic/transportation hub with Dover of Great Britain 42 kilometres (26 mi) away; this makes Nord-Pas-de-Calais the closest continental European connection to the island of Great Britain. Other major towns include Valenciennes, Lens, Douai, Béthune, Dunkirk, Maubeuge, Boulogne, Arras, Cambrai and Saint-Omer. The region is featured in numerous films, including Bienvenue chez les Ch'tis. 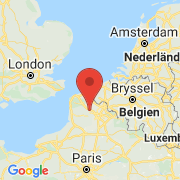