Tongue End is a small village in the South Holland district of Lincolnshire, England. It is situated 4 miles (6 km) east from Bourne and 6 miles (10 km) south-west from Spalding, and alongside the Counter Drain that runs between Baston and Pode Hole.

The name is said to refer to the shape of the land between the rivers Glen and Bourne Eau. There is a location on the Stamford Canal which is similarly formed and has the same name.

Tongue End falls within the drainage area of the Welland and Deepings Internal Drainage Board. Gilbert Heathcote's tunnel drained into the Counter Drain nearby. 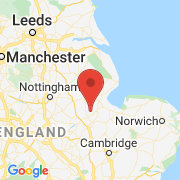