Anciently held by the Marteval family, it has been the seat of the Hazlerigg family since 1419 when the Marteval heiress married Thomas Hasilrige (the spelling of the family name was changed in 1818).

The house was built in the 1720s by Sir Arthur Haselrige on the site of the previous 15th-century manor house, of which no trace remains. The imposing two-storey south front has attics behind balustrades and eleven bays symmetrical around the central three advanced bays, which are defined by full-height Tuscan style pilasters. The central doorway carries the family crest on the keystone and a pediment. Substantial alterations and extensions were carried out in about 1835.

The house, land and contents were sold to Robert Wilkinson, owner of Rolleston Hall, for £7.8 million in 2012 (taking control in 2014). Arthur Hazlerigg is at present employed by Robert Wilkinson in the capacity of Estate Manager of Noseley Estate. 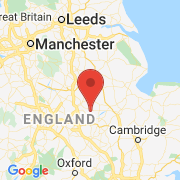