Kingston upon Hull, usually abbreviated to Hull, is a port city and unitary authority in the East Riding of Yorkshire, England. It lies upon the River Hull at its confluence with the Humber Estuary, 25 miles (40 km) inland from the North Sea, 50 miles (80 km) east of Leeds, 34 miles (55 km) south-east of York and 54 miles (87 km) north-east of Sheffield. With a population of 259,778 (mid-2019 est.), Hull is the fourth-largest city in the Yorkshire and the Humber region.

The town of Wyke on Hull was founded late in the 12th century by the monks of Meaux Abbey as a port from which to export their wool. Renamed Kings-town upon Hull in 1299, Hull had been a market town, military supply port, trading hub, fishing and whaling centre and industrial metropolis. Hull was an early theatre of battle in the English Civil Wars. Its 18th-century Member of Parliament, William Wilberforce, took a prominent part in the abolition of the slave trade in Britain.

After suffering heavy damage in the Second World War (the "Hull Blitz"), Hull weathered a period of post-industrial decline, doing poorly on measures of social deprivation, education and policing. More than 95% of the city was destroyed in the blitz and, coupled with the economic decline of the 20th century, the city had to be rebuilt in the post-Second World War fashion, rather than the previous Elizabethan and Victorian styles. In the early 21st century spending boom before the late 2000s recession the city saw large amounts of new retail, commercial, housing and public service construction spending.

Hull University was founded in 1927 and now enrols more than 16,000 students. In 2017, Hull was the UK City of Culture and hosted the Turner Prize at its Ferens Art Gallery. 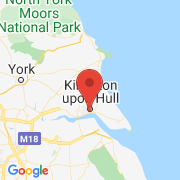