Johnby is a hamlet in the Eden District, in the English county of Cumbria. It is about 6 miles (9.7 km) from the large town of Penrith and about 1 mile (1.6 km) from the village of Greystoke. The B5305 road, the B5288 road, the A66 road and the M6 motorway are all nearby. Circa 1870, it had a population of 92 as recorded in the Imperial Gazetteer of England and Wales.

To the south of the hamlet is Johnby Hall, a fortified house or peel tower dating probably from the 14th Century, with alterations and extensions in every century since. 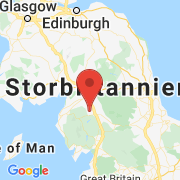