The Ardennes (/ɑːrˈdɛn/ ; French: Ardenne [aʁdɛn] (listen); Dutch: Ardennen [ɑrˈdɛnə(n)] (listen); German: Ardennen; Walloon: Årdene [ɑːʀdɛn]; Luxembourgish: Ardennen [ɑʁˈdænən]), also known as the Ardennes Forest or Forest of Ardennes, is a region of extensive forests, rough terrain, rolling hills and ridges. Geologically, the range is a western extension of the Eifel, and both were raised during the Givetian age of the Devonian (382.7 to 387.7 million years ago), as were several other named ranges of the same greater range.

Located primarily in Belgium and Luxembourg, but stretching as well into Germany and France (lending its name to the Ardennes department and the former Champagne-Ardenne region) and geologically into the Eifel (the eastern extension of the Ardennes Forest into Bitburg-Prüm, Germany), most of the Ardennes proper is located in southeastern Wallonia, the southern and more rural part of the Kingdom of Belgium (away from the coastal plain but encompassing more than half of the country's total area). The eastern part of the Ardennes forms the northernmost third of the Grand Duchy of Luxembourg, also called "Oesling" (Luxembourgish: Éislek). On the southeast the Eifel region continues into the German state of the Rhineland-Palatinate.

The trees and rivers of the Ardennes provided the charcoal industry assets that enabled the great industrial period of Wallonia in the 18th and 19th centuries, when it was arguably the second great industrial region of the world. The greater region maintained an industrial eminence into the 20th century, after coal replaced charcoal in metallurgy.

Allied generals in World War II believed that the region was impenetrable to massed vehicular traffic and especially armor, so the area was effectively "all but undefended" during the war. The German Army twice used this region to invade northern France and southern Belgium, via Luxembourg in the Battle of France and the later Battle of the Bulge. 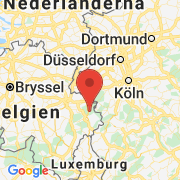