Muzinë (definite Albanian form: Muzina, Greek: Μουζίνα), is a village of the administrative unit of Mesopotam, Finiq, southern Albania. The village is known for its proximity to the water spring known as the Blue Eye, a popular tourist attraction.

The population of Muzinë is composed of Orthodox Albanian speakers from the late Ottoman period till the late twentieth century. In the twenty first century, although Albanian is the main village language, inhabitants themselves self identify as Greek speakers and some as Greek. Muzinë has undergone extensive depopulation due to the migration of its younger population, and in the early 2020s most of its remaining inhabitants are elderly. 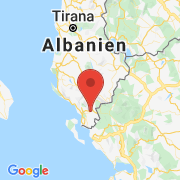